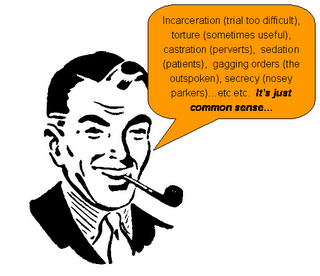 What is the opposite of ‘common sense’? ‘Stupid’ could be right. Or ‘arbitrary’. But one opposite might also be ‘principled’… meaning that you stick to deeply-held principles, even if they give you discomfort in specific cases. Conservative leader David Cameron called for “human rights with common sense” as he promised to repeal the Human Rights Act and replace it with a Bill of Rights (BBC or original speech). He can probably have a Bill of Rights (which the Human Rights Act already is) or the appearance of common sense – but not both.

The whole problem with common sense is that it implies a very elastic view of what is right… Ambiguous wording that would allow a view to be taken on the spot guided by what seems right (or expedient) at the time by someone in authority. That can never provide a useful compass in situations of great dilemma and difficulty. In the last two days we have seen courts strike down convenient authoritarian fixes at the expense of human rights –UK High Court rules against control orders and US Supreme Court rules Guatanamo tribunals illegal – that is because principle is applied, not some expedient interpretation of common sense, and that’s a vital check on executive power to erode liberty.