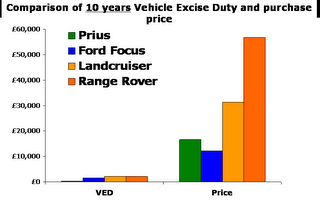 News reports that the Environmental Audit Committee (EAC) recommends raising the top rate of Vehicle Excise Duty to £1,800 (Reducing Carbon Emissions from Transport report para 52). This would be for the most polluting cars. At present, the lowest band is £40 per year and highest band of VED is just £215 for a vehicle producing more than 225 grams of CO2 per kilometre (see rates).

An excellent calculator at the Vehicle Certification Agency gives CO2 costs and VED for any make and model. The range is from 104 gCO2/km for the most fuel efficient car (Toyota Prius) up to 488 for the most monsterous SUV (Crysler Jeep Dodge SRT-10) or 520 for the most OTT sporst car (Lamborghini Diablo 2001 model).

In his March 2006 Budget speech, the Chancellor claimed that with this system of taxation: “I want to do more to encourage cleaner fuels and cars. I propose to radically reform vehicle excise duty.”

The point is that the current VED will do little to encourage cleaner fuels and cars and is anything but radical.

The chart shows just how feeble the VED incentive is in relation to the purchase price of the vehicles – the chart shows 10 years VED (because it is imposssible to even see one year when plotted on the same scale as the purchase price). So I think it makes perfect sense to raise the tax to a meaningful level – like £1,800 per year for then worst cars and to have a strong gradient – using a feebate system if necessary to maintain fiscal neutrality.

When I was quizzed on this by the EAC, the Committee Chairman Tim Yeo suggested it should be £5,000-£10,000 per year for the most gas guzzling vehicles (see EAC Report on the Pre-Budget Report page 101 – Q135). So it looks like the motorists got off lightly.