Over the weekend in an aside in my long blog about the sophistry of anti-vaping activists,  I mentioned the unfolding moral panic about vaping and, especially, Juul e-cigarettes among teens (see the quote from the blog below for background). I want to add to this with some views on appropriate journalistic inquiry and suggest a line of sceptical questioning a credible journalist could use.

Moral panic case study: “Juuling”. The New York Times ‘I can’t stop’: schools struggling with vaping explosion, and CNN, Vaping now an epidemic among US high-schoolers and dozens of other American news outlets have been feeding a moral panic about Juul e-cigarettes. This effort is obviously prompted by the Campaign for Tobacco-Free Kids, which has its fingerprints all over it (e.g. here, here, here, here, here, here, here) as part of its campaign to wipe out the vaping industry by forcing FDA to bring forward extremely burdensome and restrictive regulation that will leave only a few products from tobacco companies on the market, if that.

Rapid rises in ‘Juuling’ (the use of Juul e-cigarettes) are being cultivated into a full-scale moral panic, as far as I can see based only on anecdote and the outstanding success of Juul as a product. But let’s suppose there has been a rapid rise in Juuling in American schools – it really is a teenage craze. But how can anti-vaping activists be sure it isn’t a reason for celebration rather than panic? No-one currently pimping up the moral panic can be sure the rise of Juul is not simply the best news in years.

For all these anti-Juul activists know (which is almost nothing), the Juul craze (to the extent it is real) may be driving out smoking from schools, finally breaking the myth that smoking is cool, diverting kids from other risk behaviours like illicit drugs, and giving adults an easily accessible simple alternative to cigarettes that they can buy easily and learn to use without needing an engineering degree. That would be great news! The more popular, the better – smokers may be finally overcoming the barrage of deceitful nonsense from ‘tobacco control’ and getting on with the business of quitting smoking.  So, before anti-vaping activists blunder around in the dark making policy demands or clumsy interventions, just remember that it was only a few months ago that the activists’ primary explanation for adolescent vaping was ‘kiddie-appealing’ flavours with demands that most or even all flavours should be banned. But there is nothing kiddie-like about the Juul flavours.  They should admit this: they just don’t know what they are doing. Or rather they do know what they are doing, but it just isn’t what it appears.

How should a responsible journalist interrogate this story?

Please dig deeper… I suggest the following questions are asked or at least considered before writing more stories on this:

I loathe fake news and, even more, the false accusations of fake news hurled at news organisation like the New York Times (I am a subscriber) and CNN when they publish truthful stories that are uncomfortable for the powerful and corrupt. But the extraordinary uncritical hype generated around this vaping story leaves me wondering if anything goes in health and science journalism (or should we recognise it as activism), and we should simply disbelieve everything they report.

A Truth Initiative survey has just been published in Tobacco Control – with some data:

Recognition, use and perceptions of JUUL among youth and young adults

Key section from the results…

We know that Juul has taken about 55% of the convenience store market. 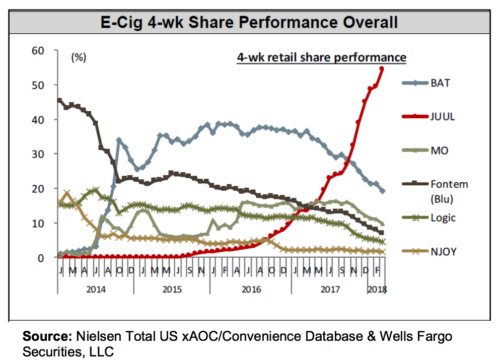 So if this overall market shift had merely been replicated in youth e-cigarette use at 2016 levels, then it would account for about 6% (11.3% x 55% = 6.2%) of 15-17 years old using JUUL.  So, on this admittedly incomplete analysis, JUUL appears to be doing about what you would expect if the ‘adolescent market’ was mirroring the adult market.

But suppose there was a significant increase and lots of additional vaping was occurring? We would still not know whether to respond by wailing or cheering.  It depends on at least three other things:

Note: why do I say the quick-and-dirty analysis above ‘admittedly incomplete’?

Of course, the journal Tobacco Control did not insist on publishing key data that would be needed to make this calculation…

One can only speculate on why space was unavailable for such findings. Perhaps because the authors did not like the results.  Given a major national panic is underway, shouldn’t we have all the data, and not have to resort to the approximations as shown above?