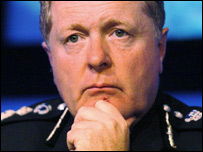 Letter from me in The Times… The paper had an absurd front page saying “Support for Met Chief crumbles” because the police minister, Tony McNulty, refused to say the position of the Commissioner of the Met police, Sir Ian Blair, is safe in advance of publication of the inquiry into the mistaken identity and shooting of innocent Brazilian Jean Charles de Menezes. But the opposite would be much worse – guaranteeing his job would be a signal that ministers intend to ignore the report. Deciding that his position is already doomed is no better – because it would be based on leaks and spin. Whatever The Times is up to – it’s annoying!