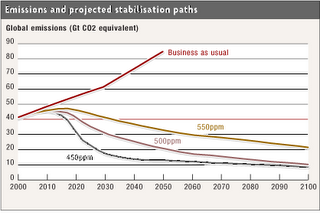 The Stern Review Report on the economics of climate change is truly fascinating and an excellent contribution… it looks like the work of a small army of über-anoraks.

But there’s a big difference between the tone and the tome. The launch messages are useful and politically powerful – doing nothing will cost a great deal; passing 550ppm is too dangerous to contemplate; doing something about it is feasible and economically good value; early action saves greater costs and risks later. The tone of the launch was oddly reassuring, suggesting that climate change can be fixed with about 1% of GDP, that’s the proceeds of about 3 months of world growth. A bargain, surely, to save us from the savagery of a rapidly changing climate? Broadsheet commentators cheered, relief was palpable, paradigms will be shifting, but only a bit. Sorted!

The 700 page tome is much more unsettling. Take the emissions trajectories (see chart). Even the highest risk scenario that Stern is prepared to countenance has world emissions peaking in just 10 years from now and falling globally by at least 25% by 2050, compared to expected doubling under BAU. This would require a massive overhaul of the world energy and transport economy, agriculture and forestry, and given that many energy sector assets have lives of 40+ years, it means a dramatically different paradigm will need to be established almost immediately and almost everywhere. Existing assets may well be stranded and obsolete. And it’s not just investment, but also major changes in behaviour that are required, over which government’s do not have total control.

In terms of the response, much was made of the role of emissions trading and the scope for a global carbon market based on an extension of the EU system though Stern wisely proposes using a mix of taxes, cap ‘n’ trade, and regulation to set a broadly consistent carbon price (Part IV). But a trading system is merely a valuable efficiency measure allowing separation of responsibility for cuts and who actually makes them. The fundamental question is how responsibility is determined… and this is coded into the the initial allocation of ‘property rights’ – the right to emit carbon – in the system both the total amount and its distribution. Now this really is at the heart of the ‘global collective action problem’ that Stern has described. (And we should note that poor allocation is the most a conspicuous failure of the EU ETS system – see Oxera discussion – Is the EU ETS Working). The discussion of collective action (see Part VI) is summarised in the conclusions:

Countries should agree a broad set of mutual responsibilities to contribute to the overall goal of reducing the risks of climate change. These responsibilities should take account of costs and the ability to bear them, as well as starting points, prospects for growth and past histories.

Er, yes. But that is the very core of the problem, what makes it difficult to negotiate as each party places different weighting on this factors consistent with its perceived interests, and in any really ethically based approach, these principles create huge challenges for the developed countries, rampant over-users of the common global carbon sink… Given this is the heart of the problem, surprisingly little space is spent on exploring it. Buried on p. 475 is a table that discusses burden sharing, and a remark made almost in passing… 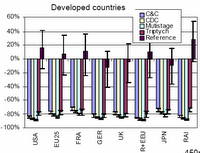 Ninety percent… ouch!! Throughout the report and in the presentation, there seems to have been a determination to accept the UK’s target of a 60% cut by 2050 is an adequate goal for developed countries… but also on p.475 is a chart (left) comparing four different ways of allocating the global carbon budget using different principles. As you can see here, the required cuts for the EU are around 80% by 2050 for stabilisation at 550ppm.

The report is a very positive development, and Stern himself is part of the response to the global collective action problem. But I think he made it sound a lot easier than it will actually be and hasn’t quite provided the blueprint for addressing the collective action aspects of the problem that he set out to do.

2 thoughts on “The soothing sound of Stern”