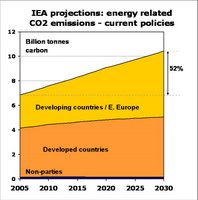 I’m looking forward to the release of the Stern Review on the economics of climate change on Monday. Sir Nick Stern has been thoughtful and eloquent on the subject, describing the problem of climate change as a complex international and intergenerational collective action problem, in conditions of uncertainty and with potentially irreversible effects. He also makes much of grounding the economics in the science – hopefully consigning once and for all one of the great shortcomings of many of the sceptics’ economic critiques of climate change. The timing is auspicious and deliberate – in advance of the UNFCCC & Kyoto Protocol meeting in Nairobi in November, where new impetus will be sorely needed.

Much of the economic debate about climate change has focussed on four themes: the impact of growth on emissions; the availability of low-C technologies and the economics of their adoption; the external (social) cost of carbon;and fiscal instruments and market designs to control emissions. A bold new analysis will need to build on this and integrate several difficult concepts. If I may be so bold:

Stern promises to deploy many concepts in his analysis: collective action theory, game theory and free-riding, externalities, development economics, behavioural economics, and much more. It will be an important contribution if he and his team can give us better ideas about how to strike a balance between controlling and tolerating risk, and the related costs and benefits of mitigation and adaptation, and, given his emphasis on the collective action problem, some new insights into who should pay for what and how.