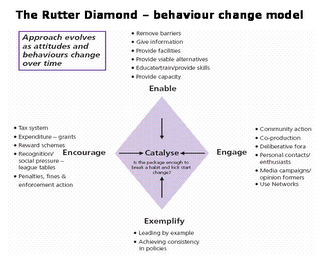 And it turns out they all had a common theme, namely ‘behaviour change‘ – ie. recognising that people have considerable behavioural autonomy and governments can’t simply legislate to achieve many of the key sustainable development outcomes, so more subtle persuasive models are needed. This is sometimes seen as a branch of paternalism known as ‘soft paternalism‘.  The Economist [leader/article] recently highlighted its rise – partly to disparage (it in that annoying way they have), but also approvingly to distinguish the soft from the ‘hard’ variety. I think it’s an apt description of the role of the modern state in securing collectively-valued outcomes from an aggregation of individual behaviours.

While at the PM’s Strategy Unit, I co-authored a swotty piece of work on Personal responsibility and behaviour change, and there has been good work done by Tim Jackson and others. Best of all, however, is the simple elegant model established in the UK Sustainable Development Strategy at Chapter 2 – the essence is pictured above and widely known as the ‘Rutter Diamond’ after its creator, Jill Rutter of DEFRA (whose birthday the Bacon Butty is celebrating today).

What, then, are ingredients of a strategy designed to change the behaviour of individuals or businesses?  Here’s my list built on the Sustainable Development Strategy: