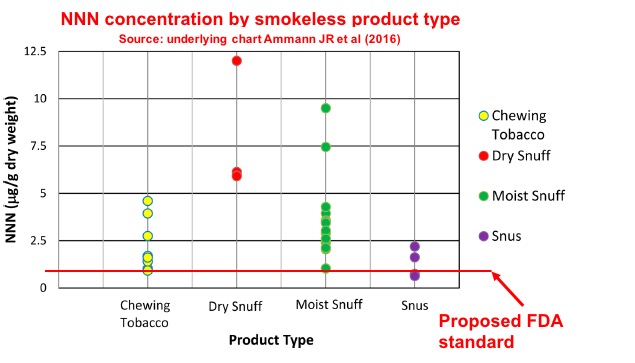 Just looking for our submission to FDA’s consultation? Here it is: Submission by Clive Bates & David Sweanor – PDF

But carry on below for some discussion and explanation of the chart.

Standards, good but… Normally, I’d be in favour of regulators setting standards for things they are regulating – standard-setting is a transparent approach that means everyone knows what they have to do, the supply chain can gear up, consumers know what they are getting, and there is no nonsense about changing the rules or not even disclosing what the rules are.  But… three qualifiers to this cheery endorsement of standards:

This standard fails all of the above.

The chart above… is taken from Ammann et (2016). Researchers working for FDA examined NNN levels in 35 US smokeless products – I have added the parts in red. Two things to note.

1. FDA’s proposed standard is set at the extremity. First, the standard is set at the lower extremity of what is on the market in this sample.  This is a ridiculous thing for a regulator to do with an untried standard.  NNN is not a completely controllable component of tobacco – it can depend on weather and humidity, for example, and there is bound to be natural variability in any plant product.  The products with 94% of the market, that moist snuff (green blobs) are all over 2µg/g, with one exception, and with an average around 3.0µg/g. So these would need to make deep, non-marginal changes to meet the standard, if it was possible at all. Most of the larger companies in the market have already been trying to reduce NNN and may have exhausted the available technical options. So it is very far from clear that anyone can consistently meet this standard or even get close.   A regulator concerned for its effect on the regulated market, should not act in this way – a standard would be designed initially to challenge outliers, then tighten over time. It’s no good saying ‘well, produce Swedish snus instead’ – what happens to the people who choose American moist smokeless?

2. The inclusion of dry snuff in risk calculation. Second, look at ‘dry snuff’ and the high levels of NNN and these were probably much higher in the past. Dry snuff also shows up in surveys with elevated oral cancer risk.  When FDA estimated the cancer risk for all smokeless tobacco it pooled in surveys that included dry snuff. These surveys had the effect of greatly increasing the average relative risk estimate for smokeless as a whole.  Yet dry snuff market share is only 0.7%.  So a hardly-used ‘dirty product’ was added to the mix to beef up the risk estimates, which were then applied to the widely-used but much lower risk products such as American moist snuff.  Sleight of hand? I couldn’t possibly comment.

Submission to FDA…. David Sweanor and I have just made a submission to FDA’s consultation on a rule that would limit the concentration of a toxin NNN to 1 microgram per gram (1.0µg/g). The problem with this standard is that it fails the three tests above. It would cause a major disruption of the supply chain because that standard has been set at a level to the extreme of where most US smokeless tobacco sits (the trade-weighted average is over 3.0µg/g).  In theory any product can change to meet the standard, but in many cases by becoming a completely different product.  So our main argument is the rule:

The real story is that they shouldn’t even be regulating here.  FDA should spend its time undoing the damage it is about to do to the vaping industry and encouraging people to switch or quit.

Summary from our submission

Request. We respectfully suggest that the proposed rule is withdrawn as soon as possible after the closure of the comment process. Instead of pursuing damaging interventions on the lowest-risk tobacco products, FDA should redeploy its resources to encourage and facilitate smokers to switch to low-risk alternatives to cigarettes such as smokeless tobacco, heated tobacco products and vapor technologies.

The reasoning underpinning our suggestion is in four parts:

Other writing and submissions of note

Comments in favour of the rule