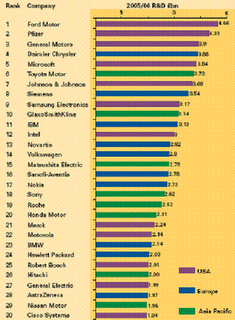 A couple of interesting reports on R&D… firstly the DTI’s R&D Scoreboard 2006, where clearly more is better – at least one assumes that’s the purpose of creating lists and league tables ordered by the sums spent (see chart from the report showing the world’s biggest R&D spenders). Note the big spenders are not necessarily who you would regard as the great innovators.

The second report is from the management consultants Booz Allen Hamilton… Its arresting title is: A Select Set of Companies Sustain Superior Financial Performance While Spending Less on R&D Than Their Competitors [release/report]… What it comes down to is that innovation drives business, but that R&D spend is only loosely correlated with innovation. Booz Allen reckons that 94 out of the 1,000 companies it surveyed are ‘high leverage innovators’ (ie. Google not Microsoft, Toyota not General Motors)- they have an innovation system rather than R&D spend.

All of this should give pause for thought… For example, the EU plans to spend €50.5 billion on R&D between 2007 and 2013. Will this be spent in a way that generates innovation? Almost certainly not – the dominant concern will be making sure each country gets its ‘fair’ share. We also know that high tech parts of the economy are quite small – Big Pharma is our biggest R&D spender, but accounts for just 0.62% of the economy compared to banking at 5.85% or retail at 5.73% [ONS- see table 1.51]… what does innovation mean for service industries? And why do we pay so much attention to counting how much is spent on R&D, and ‘input’ measure, when it poorly predicts for innovation and doesn’t really tell us much about innovation in the service firms that form the basis of the so-called knowledge economy? Look at London – by far the highest economic activity in the country, but the second lowest level of R&D:GDP ratio after the North East [see Regional Trends]. London is powered by financial services, business services and creative industries – all competitive internationally and all innovating like mad… but how many of these declare an R&D budget on their accounts.