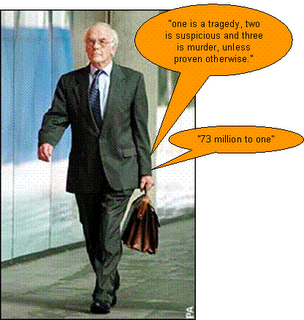 It’s hard not to dislike intensely Professor Sir Roy Meadow – the ‘expert’ witness that consigned Angela Canning to gaol and her family to utter misery on the basis of completely incompetent statistical assertions designed to shore up his idiosyncratic theories about sudden infant death syndrome. And he has never even apologised.

So good news today to hear that the General Medical Council is to appeal against the High Court ruling denying its right to stike him off. And the GMC will be supported by the Attorney General. [BBC item]. The High Court’s ruling was a disgrace, effectively protecting experts from the professional consequences of outrageous failure with extreme consequences for others.

The most famous claim with which Meadow mislead a jury was that there was a 73 million to one chance of two ‘cot deaths’ in an affluent family. There are two childish flaws in this statistical claim:

1. Widely reported: the events may not be independent – a common environmental or genetic factor may apply to the both the first and second deaths.

2. Less well appreciated: remember there are 1.5 million UK families that have 2 or more young children [data from ONS]. So if it was actually 73 million to one for a specific family, you’d be expect about a 1 in 50 chance that it would happen somewhere in that population. It’s a bit like rounding up all previous lottery winners and accusing them of fraud because there’s only a 1 in 14 million chance of winning and its very unlikely they would have won by chance. Add both these effects and it is hardly surprising these tragedies happen from time to time.

The best we can hope for is the Roy Meadow’s reputation is utterly destroyed. personally, I think he should be behind bars – his negligence and incompetence caused far more agony than any assault or robbery could ever.