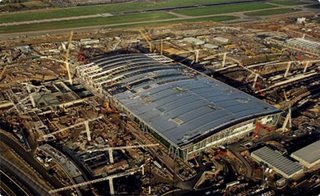 Whatever one thinks of the sanity of the projected growth in aviation as foreseen and accommodated in the aviation white paper, The Future of Air Transport, the project to build the £4 billion Terminal 5 at Heathrow has some fascinating lessons for project management and contracting – and wider commerce. Against the prevailing orthodoxy, the project promoter, BAA, has assumed all the project risk itself, instead of designing contracts to allocate risk – with penalties – to its main contractors. After studying mega-project failures elsewhere, BAA reasoned that an aggressive risk transfer approach would lead contractors to behave in ways that harmed its interests:

Based on this analysis of its ‘principal-agent problem‘, BAA’s Terminal Five Agreement embodies a co-operative model based on problem-solving and benefit sharing for the whole project, exploiting a high degree of trust and co-operation [see FT, Economist articles] and was influenced by Sir John Egan’s earlier work on Rethinking Construction. It does sound idealistic, but it also seems to be working… with the project ahead of time and budget – and on schedule to open 4am March 30, 2008. Let’s wait and see, of course.

So what?
The interesting thing is how obvious this seems… any large project must require a responsive and adaptive ‘production system’, as it will face many problems that cannot have been anticipated at the tendering stage, because many of its functions are interrelated and the timing of different parts of construction will dependent on each other. It’s hard to see how a responsive and adaptive production system can been created from the aggregated behaviour of contractors strongly incentivised to act as individual loss-minimisers and rent-seekers. A co-operative model based on trust with shared benefits and pooled risk model feels intuitively more likely to work. Yet contracting orthodoxy and most PFI deals are based on the former model, not the latter. The paradox is that the former appears to offer the promoter less risk (by contractually allocating it to others), but actually creates more risk (by establishing a dysfunctional production system). BAA’s boldness in accepting the project risk has probably reduced its overall exposure by making it more likely to deliver on time and budget, and therefore reducing the risk of losses arising from being unable to deliver capacity for aviation growth to its customers.

It’s premature to declare T5 a project management success, and it may be working well because it has yet to face a deal-breaking setback – but I do hope the public sector is learning lessons from the experience so far and is prepared to experiment with some more imaginative approaches to risk allocation.