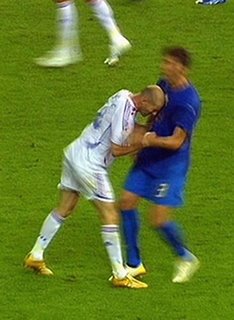 Legendary Liverpool manager Bill Shankly famously said of football: “it’s not a matter of life and death… it’s more important than that“.

And I think this sense of perspective might be the way to appreciate the genius of Zinédine Zidane in his inspired decking of Italy’s Marco Materazzi. According to the Times, forensic lip-readers have declared that he called Zidane: “the son of a terrorist whore” before adding “so just f*** off”. Other top lip-readers have inferred similar insults.

The big story is that Zidane was reacting to something more important than football. As an ethnic Algerian and muslim (with sick mother) who has done more than most to moderate and integrate his community this is a vile and calculated racist insult. For someone of integrity, the need to mount a visceral response is more pressing than the constraints of football rules. Football commentators were bewildered by his violent gesture, but they were thinking about football and not about life.

While FIFA is covering itself in anti-racism initiatives, the I consider Materazzi’s offence to be a professional foul of the very worst kind – but excused because it was verbal. Zidane corrected that injustice in the real world by making an immense sacrifice in the foootball world. FIFA promises to investigate…