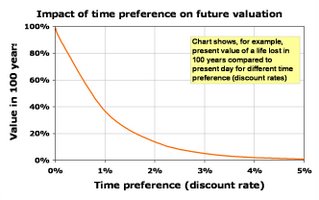 Time for another look at the Stern Review and what people have said about it. It’s received much critical acclaim: Stern even lined up five Nobel laureates and other notables to applaud at the launch [see here] and the BBC canvassed largely favourable expert opinions [here]. And I think it is an incredibly important step forward – not least because of its politics… the messenger is at least as important as the message. Not surprisingly, the report is attracting criticism, and in my view some of this is fair. So what to make of the Stern Review?Objectors have criticised various aspects the report (see below). The criticisms cover several areas, including: the underlying science; optimistic costs of mitigation and adjustment; pessimistic views of adaptation and impacts; the discounting conventions used. The choice of discount rate makes a huge different to the weighing of costs and benefits which are separated by many years – our mitigation efforts on climate change only bear fruit late in the century. Any analysis of climate change is highly sensitive to assumptions about discounting – the chart above gives the present value of something valuable in 100 years time for different discount rates.

On science: Stern took the established scientific consensus as an input to his review and was provided with good synthesis material from expert bodies such as the Hadley and Tyndall Centres. The main criticisms seem to rehash concerns that recent global warming is not that unusual given temperature anomalies like the Medieval Warm Period and Little Ice Age. The main scientific counter-argument here is that these were regional, not global, temperature anomalies. Stern provided a good discussion of some of the scientific criticisms levelled at them earlier in the process [World Economics article, June 2006].

On costs and difficulty of mitigation: Stern has made generous assumptions about future technology development and costs. Whether his assumptions are correct depends on how one believes technologies evolve. For environmental technologies, the evolution may itself be a product of the policy framework and the sharpness of the incentives its creates for investment and R&D – but the kind of response that would keep to below 550ppm would be quite dramatic and the incentive signals very strong (see Stern’s launch presentation chart 4 requiring world emissions to peak by 2020). My view is that Stern made it all seem too easy. Not only is underlying economic growth currently driving emissions in the wrong direction (upwards!) at an unprecedented rate, there is also huge inertia in energy-using assets, production systems (like agriculture and vehicle manufacture), and in human behaviours, that stand in the way of slowing growth and starting to turn the trend downwards. All this means that the rates of change envisaged in Stern will require interventionist policies of unprecedented strength and global coverage to create the necessary changes in the next few decades.

On costs of impacts and adaptation: Stern has considered, rightly, costs of disasters and extreme events and major system failures. He has concluded there is a lot at risk and builds up his case carefully in chapter 6 showing that earlier lower estimates had not included non-market impacts or reflected major system changes. My own view is that the GDP numbers (5-20% GDP loss in the absence of strong mitigation) are a bit misleading. I’m not sure what GDP in 2100 will actually look like – at current growth rates the world economy would be 36 times larger in 2100, and by then many other constraints will have kicked in. His higher damage estimates also include impacts on health, human life and the environment. Bravo! But rather than look into the future, if we look across the world today, the willingness to pay for protecting lives in far away countries doesn’t seem that all that high.

On discounting: this reflects the need to compare costs and benefits that arise in the far future with costs that arise today. Stern used an unusually low discount rate and a first principles discounting regime – see excellent background paper for discussion of the economics and ethics of long-range discounting. This regime gives high weight to future generations and therefore high value to taking costs now to secure benefits much later. But I believe he is on weak ground here… not because it is wrong for Stern to believe this is right, but because he has made an ethical judgement about appropriate ‘time preferences’ that doesn’t reflect what many or most people actually feel. Though discounting seems like a technical matter, it is fundamental in climate change. Here’s a few observations:

Stated versus revealed time preferences
The discounting regime is central because it codifies the answer to the question: “how much do we collectively care about the future?” I suppose there are two ways of looking at this question. Firstly, an analyst could apply an ethical framework and ask ‘how much should we care about the future?’, or alternatively, she could look at how people and governments actually behave and ask ‘how much do we care about the future?’. Stern has taken the former approach, but what governs how we and governments actually behave is closer to the latter. This dichotomy emerges in many aspects of policy & life – it is why we spend a fortune on acute health care and relatively little on long-term public health… the official discount rates say spend on public health, but the revealed time preferences say spend like mad on securing a few extra weeks life for the terminally ill – and that is what we do. [Update 17/12/06: But I think it means Stern should be clear that his economics of climate change are predicated on an certain ethical framework that is rarely found in real life – his economics are ‘normative‘ and are based on political propositions. I think it is better to apply a ‘positive‘ economics, looking at how the world is, and then build a consensus for a different politics and value-set based on based on conclusions drawn from where the real world appears to be taking us. In some ways, Stern’s relatively upbeat conclusion is an artefact of his generous assumptions about how we value the future].

Discounting explained… Discounting used here has two main components. First, how we convert future consumption to future welfare; second how we value future welfare compared to our own… more precisely:

Can a government’s preferences be that different to the people that elect it?
It can be argued that governments should act differently to citizens, and take the long view. And indeed, it might well be that citizens have greater willingness to consider the long term if they are acting collectively – showing altruism without the annoyance of free-riders. This is right, but surely can only go so far – the Stern Review accepts the argument made in section 2 of the background paper on discounting that governments should use a different (lower) discount rate to that implied by the instinctive ‘impatience’ of the citizen – which manifests itself in very aggressive short-termist time preferences. But is it possible for governments to use time preferences that are much longer term than the typical citizen, even if polished technocrats believe it to be right? Governments are after all elected to express collective preferences, and if they depart too much from the preferences of the voter, they’ll get the chop at the ballot box. This isn’t theorising: look at fuel protests!

The bad news so far…
Coded into an arcane discourse about the discounting regime is probably the most fundamental economic question about climate change: how much do we care about the future? We protest that we care a lot, but we behave – individually and collectively – as if we don’t care much. If the economics of climate change were recalibrated to the short-termism of our revealed time preferences we would act differently – placing much more emphasis on adapting to impacts over the next few decades and caring relatively less about controlling emissions because we know that reducing emissions only has benefits in reduced risks in the second half of the century, and only if everyone else does it too.

The better news…
Stern’s report is part of the response to the counsel of despair in the paragraph above and human civilisation has progressed by development of altruism and common purpose. Stern’s review should encourage us to think that modest sacrifices for the long term are worth making and manageable – and therefore we might put it into the category of those things we are prepared to be long-termist about. It also raises the question of whether using a welfare based global cost-benefit analysis is the right way to think about this problem – perhaps a human rights or pure justice lens would be better.

Examples of challenging commentary on Stern

5 thoughts on “How much do we really care about the future? Stern’s critics assessed…”