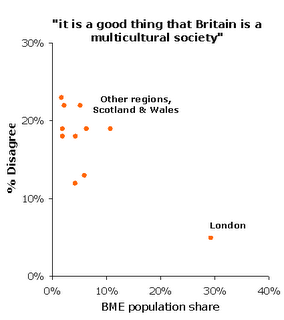 It seems more middle-England hysteria is taking hold as yet more ideas circulate about cracking down on immigration. One of the most notable things about Britain is that dislike of multi-culturalism is closely linked to the likelihood that the person disliking it will never encounter it (see chart based on Mori attitude data and census data on black and minority ethnic share).

London stands apart from the rest of the country and it is a modern triumph of tolerance and multi-cultural energy. It has a completely different view of migration (on average – see chart), and its economy is powered is by highly productive, hard-working migrant labour. There are 34 communities of foreign nationals in London with more than 10,000 members, and at least a further 20 communities with more than 5,000 members.

Where there really is a problem is with alienated white working class that have been too long out of the labour market, wrongly blame migrants for their woes, and have adopted a ‘culture of entitlement’ with deepening welfare dependency. Resentment is fuelled by perceived and actual unfairness over allocation of affordable housing – and fanned by Far-Right activism. The excellent study: The New East End: Kinship, Race and Conflict gives sharp insights into racial conflict where it really matters (ie. not in the golf clubhouses of the Home Counties).

2 thoughts on “Counter-productive hysteria about immigration”