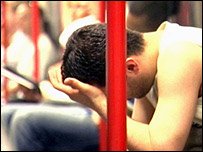 Now back from hols and ready for the next blogging season, but I must turn first to a seemingly obscure but urgentsummer matter – heat transfer in the London Underground. This summer saw headlines proclaiming temperatures reaching 47 degrees (BBC) and than the rather forlorn and inadequate survival advice to passengers from Transport for London. The bad news is that this is all going to get worse.

Huge amounts of energy are pumped into the Tube system, mostly as electricity that powers the trains (about 90%), with the rest coming from station lighting, signalling etc and of course respiring people. The electricity that goes in virtually all eventually ends up as heat through friction in moving parts, braking, air resistence, turbulence etc. I’ve donned the numbers anorak and estimated from TfL’s Environmental Reports that the 1,148 GWh of electricity used to power the Tube each year equates to having a one-bar (1Kw) electric heater placed every 3.1 metres along the 408 Km of track that makes up the London underground, and switched on night and day. About 40% of the track (the busiest 40%) is underground so this heat has to dissipate into the surrounding earth for the deep tunnels.

Adding air conditioning to trains provides but temporary respite for the tortured traveller – the waste heat still needs to be dissipated, plus the energy consuption of the air-conditioner. There are several ambitious, and costly, cooling schemes under consideration (article) involving the use of groundwater to cool deep tunnels like the Victoria Line and the Railway Engineers’ Forum has held seminars to worry about it. Needless to say, climate change only makes things worse, by generally heating up everything. The Mayor offered £100K to anyone coming up with a good idea, but the Cool the Tube prize went unclaimed having generated amusing but unworkable schemes.

Not much discussed in all the noise about this problem is the fundamental solution – much more energy efficient (lighter) rolling stock, probably with better track to reduce rolling resistence to reduce the amount of energy going in to the system and regenerative braking – this reducing the energy demand. I hear at a conference earlier this week that the £16 billion 30 year public private partnership (PPP) to overhaul the Tube is silent on the question of energy and the energy efficiency imperative of the rolling stock. If there was ever a win-win opportunity for procurement to do something sustainable then this is it. I was reassured to hear that at least one of the PPP players, Tubelines, is now on the case.