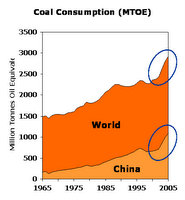 King Coal would like it to be known that rumours of his death are exaggerated… In 2005, the year when the G-8 promised to grip the climate change problem, the fastest growing source of energy in the world was, yet again, coal. Not only did world energy consumption increase (by 2.4%) but it also became more carbon intensive as coal displaced oil and gas in the energy mix. It’s driven by growth in China, which now has 37% of world coal consumption – see chart [BP energy statistics]. China’s economy grew rapidly, but with growth in heavy industry it became more energy intensive and more carbon intensive [Worldwatch report].

More scary, if that’s possible, is that the world currently has proven coal reserves of 155 years – known coal deposits that could be mined economically at current prices and technology divided by the current annual rate of production.

It’s easy to freeze in panic at the awesome challenge of China’s energy economy… but there are things that can be done: carbon capture and storage, energy efficiency, renewables, Clean Develevopment Mechanism projects etc. Given that about 6,000 miners die in Chinese mines every year [more on this in a comment to this post] a robust approach to mine safety might close mines, raise prices and reduce demand. The question is whether the policy response could be strong enough to contain the growth in China’s carbon emissions.

Despite the good intentions of the G-8 Gleneagles summit, there isn’t much we can say about the rampage of coal through the Chinese economy. That is because we haven’t actually put our own house in order – coal consumption in the UK grew by 10% between the post-war low in 1999 and 2005. Given we have a target to reduce CO2 emissions by 20% by 2010 compared to 1990, the rise in coal (and CO2) reveals a pronounced weakness of the UK policy response and therefore leaves us with a “do as I say, not as I do” credibility problem when it comes to encouraging others.

One thought on “Coal – the new black”