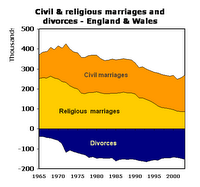 I attended a civil partnership ceremony this weekend – an arrangement for same-sex couples to make a life-long commitment and to secure the same sort of legal rights as married different-sex couples. These came into being in December 2005 through the Civil Partnership Act 2004. The ceremony and whole day was absolutely terrific and congratulations to James and Andreas who looked happy, relieved and resplendent in their D&G jackets.

What struck me most was the simple elegence of the words of personal commitment between the two, unsullied by the intrusion of a mythical supernatural creator; the entirely secular but very moving readings; the merciful absence of sermons and hymns (does anyone ever read the words of these absurd chants before singing them?) and replacement of the baying flatulance of the church organ with a sublime solo harpist. It was altogether a much more uplifting and 21st century experience than any wedding I have ever attended in a church.

Perhaps this sort of experience will help to bring ‘union’ back into favour – and arrest its long term decline. Understandably, decline has been especially pronounced for religious marriages, which are now a small and dwindling minority (see chart from ONS data). I was proud of the widespread openness to this in Britain (contrast with the US) – the public and even tabloid newspapers got behind it. Needless to say, misguided Christian groups, such as the Christian Institute, lead the opposition to this important social innovation. The Church of England did all they could to marginalise and diminish it short of outright opposition (note the incredible pomposity and opacity in the statement at this House of Bishops link). That sort of thing might have impressed 16th Century peasants, but I don’t think it will carry much weight now.