E-cigarettes represent an amazing market-based, user-driven public health insurgency. From nowhere to €500m in Europe, the market is growing rapidly and already almost equals the market for NRT, according to the European Commission’s consultants (see chart and Matrix report p21). Without anyone in the professional public health field doing anything and without spending any public money, smokers have been quitting, switching and cutting down using e-cigarettes. Enter the regulators… END_OF_DOCUMENT_TOKEN_TO_BE_REPLACED

The European Commission has published a draft directive on tobacco products.  Unfortunately it bans and obstructs much lower-risk alternative to cigarettes, such as smokeless tobacco and e-cigarettes, so its effect would to protect cigarettes and harm health.  However, it is not too late to do something about it. END_OF_DOCUMENT_TOKEN_TO_BE_REPLACED

On 30 November, the draft EU Tobacco Products Directive was circulated for inter-service consultation (ie. sent round all other Directorates General in the European Commission).  Its contents are not yet public, but it is widely thought to maintain the ban on snus and to impose strict restrictions or even bans on reduced risk non-combustible tobacco products, e-cigarettes and novel electronic nicotine devices. I cannot sufficiently stress how wrong and harmful that would be, given the role these products play as alternatives to smoking.  I remain ever hopeful that good science, ethics and law (and common sense) will eventually prevail. To that end, I have written to the new Commissioner, Dr Tonio Borg, to suggest he makes five changes to the Commission’s approach.  Here’s the letter: END_OF_DOCUMENT_TOKEN_TO_BE_REPLACED

The microeconomics of switch from an incandescent bulb to a compact fluorescent are amazing: see my Google spreadsheet here*, showing a cost of carbon dioxide saved to be -25p/tonne (ie. win-win) and a benefit-cost ratio of 19. The graphic to the left from a flyer on cost-benefit for CFLs by the Energy Saving Trust gives it from the consumer perspective – showing a £78 cash saving for a £3.70 outlay..!

What’s particularly good about this is the following: END_OF_DOCUMENT_TOKEN_TO_BE_REPLACED 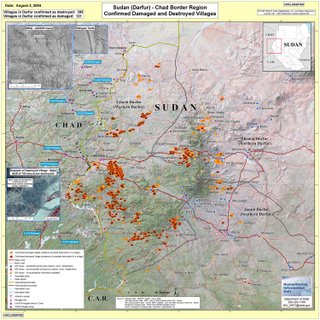 Q. When does an ethnic conflict become a genocide?
A. In retrospect

Not an obvious subject for jokes, but the situation in the Darfur region of Sudan supports the case for cynicism. The elements of the current situation have been widely rehearsed (see BBC in depth coverage and The Guardian’s collection), but crisis point has been reached with the Government of Sudan demanding withdrawal of African Union peacekeepers while blocking the arrival of blue beret UN peacekeepers, which are not in any case forthcoming, while attacking civilians and arming the Janjawid Arab militia and using them as proxies in an orgy of killing, rape, abduction and atrocity (see 2006 conflict map). The destruction is systematic and ethnically targeted and has so far involved slaughter of at least 200,000 and ‘internal displacement’ of about 1.8-2 million, which the African Union are there to protect, with mixed results (see Brookings Institution). What is going on…? END_OF_DOCUMENT_TOKEN_TO_BE_REPLACED

Have just set this thing up and now realise I’ve got nothing interesting to say.

Hopefully, it will come.