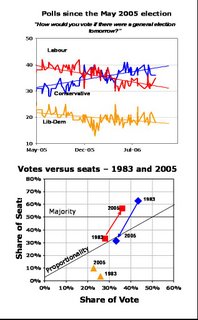 A quick stock take on the political scene now that party conferences are done – with some input from the excellent Electoral Calculus site. One of the most interesting things is the uphill struggle the Conservatives face – one estimate suggests that for an equal share of the vote, they gain 90 seats fewer than Labour, equivalent almost 5% of the vote – it arises from smaller seats in Labour voting parts of the country, lower turnout in Labour seats and tactical voting [see explanation here].

Boundary changes
On the other hand, the Conservatives have a fairly healthy trend in the polls (see chart), and the good news for The Cameronistas is that forthcoming boundary changes work in their favour (partly correcting the unequal size of constituencies) and would erode Labour’s majority by 22 seats on 2005 voting [explained] and these changes are likely to come in within a couple of months of the Boundary Commission’s report, which is expected by 31 October [newsletter explains]. Ed Balls, one of the Chancellor’s closest allies, loses his Normanton seat in the proposed changes and he is now challenging the changes in the High Court…  The electoral system does create some strange effects:

Conspiracies that just can’t be right, can they?
Perhaps the imminent boundary changes were one explanation for the hasty and botched coup attempt against the Prime Minister in September. There is speculation (and quite good reason) that the Chancellor would call a snap election if he wins a leadership contest – to secure a mandate, but perhaps also to secure some seats prior to a boundary change. But to benefit from the current boundaries – he would need to be quick, or the have process slowed down. Conspiracy theorists [see Boris Johnson] see Mr Balls’ legal action as a tactic to delay the changes and buy time – and seats – if the succession can happen fast enough. I refuse to believe the Chancellor and his allies would be that cynical.

Electoral productivity
An interesting aspect of UK General Election is what it takes to win… the lower chart (above) shows the ratio of share of votes to share of seats for the 1983 and 2005 election. The key to victory is ‘electoral productivity’ – achieving a high ratio of outputs (seats) to inputs (votes), rather than share of vote – and getting as far as way as possible from that power-thwarting line of proportionality on the chart (well, unless you are a Lib-Dem for whom proportioality would be bliss). This is why things like Boundary Commission matter so much – they affect the conversion of votes to seats and power. The Electoral Calculus site allows the conversion of pretend voting results (ie. polls) into seats, using its calculator. Holding the Lib-Dem vote constant at the level of the 2005 election, you can show that the Conservatives would need a swing of 5.6% to secure a majority.

Labour could win by coming second
Today’s Times provided an interesting polling snapshot. It suggested that Labour had closed the Cameron-induced gap on the Conservatives following the conference season – and this would have Labour on 35%, Conservatives, 36% and Lib-Dems at 18%. Using the calculator, this Conservative lead in the vote would bequeath Labour a 10-seat overall majority of seats – amazing! The Lib-Dems would lose heavily.

A Blair Bounce?
It looks like the Labour bounce following the conference was actually a Blair bounce, because the same poll suggested that with Gordon Brown as PM, the voting would be very different – Labour-34%; Conservatives-42%; Lib-Dem-15%. Wierdly, a Gordon Brown premiership seems to maintain the Labour vote, but sends Lib-dems and nationalists scurrying into the Conservative camp (is that a Scottish thing?). Firing up the calculator again with these numbers we see a different result – this time a Conservative overall majority of 18 (ie. not much for such a large poll lead) and the Lib-Dems virtually wiped of the map with just 5 seats. Obviously, the Chancellor has yet to set out his stall and set off what is sure to be a spectacular “first 100-days” policy fireworks show, if he gains the leadership next year. All of which should earn him some popularity if it goes well.

Three interesting things in all this: first, the obvious one that the idea of Gordon Brown appears, at least for now, to convert a Labour majority to a Conservative majority; but second, just how bizarre and inadequate our electoral system is at the simple democratic task of ‘representation’; third, when the parties are much closer and we are in hung parliament territory, boundary changes matter a great deal and might influence political tactics and election timing.