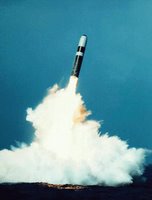 The government was always going to renew its nuclear weapons capability and despite the minor furore, the Chancellor was stating the obvious in his Mansion House speech (BBC story). Despite the obvious lack of an enemy, the obvious threats for which nuclear weapons are useless, and the obvious opportunity cost of not using the money for peace-making and peace-keeping, there is just a world-leader phallic thing about these weapons and it would have been startling if he had announced a national nuclear emasculation. What is now more important is exactly what this capability would be. There are many possible options (and costs) for the platform (air launched, submarine), missile system and warheads. The degree of firepower, independence from the US, and readiness (minutes, days or months?) are also variables. So what is a minimum deterrent? Virtually nothing was said on this.

Also important is whether they can show it is is compatible with the Nuclear Non-Proliferation Treaty – especially Article VI, which requires:

Each of the Parties to the Treaty undertakes to pursue negotiations in good faith on effective measures relating to cessation of the nuclear arms race at an early date and to nucleardisarmament, and on a treaty on general and complete disarmament under strict and effective international control.

This weasel-worded commitment to disarmament is more important in its spirit than its evasive letter – because it reflects the interdependence that drives proliferation. It’s a shame the Chancellor didn’t sound a more statesman-like and cautious tone, more like Mohamed ElBaradei, the Nobel prize winning Director of the IAEA, who recently said in an excellent Washington Post article:

I have been calling for […] a recommitment to disarmament — a move away from national security strategies that rely on nuclear weapons, which serve as a constant stimulus for other nations to acquire them.