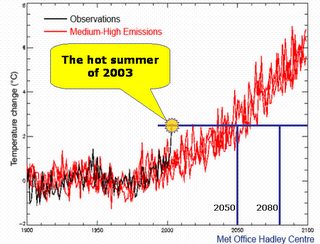 Just when you thought the US military couldn’t become more detached, it describes the suicide of three inmates at Guantanamo Bay as an “act of asymmetric warfare waged against us” (BBC report). Guantanamo reminds me of The Trial by Franz Kafka – a surreal, bullying and unflinching judicial apparatus that denies humanity and justice. But what do those revealing words tells us?

END_OF_DOCUMENT_TOKEN_TO_BE_REPLACED

How to interpret England’s 1-0 victory against Paraguay? On the one hand it was a win. On the other hand, it was only just a win, a poor performance marred by defensive tactics and bad subsititutions that allowed the Paraguay into the game. This might have revealed England’s deeper weaknesses. One guide is betting markets, like Betfair. Its market in an England World Cup win showed deterioration in the market’s view of England’s chances in the period after the game (see chart), meaning the money says it was a setback. 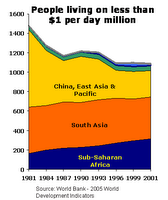 As a call to arms, you can’t beat the first target in the first of the Millennium Development Goals … “Between 1990 and 2015, reduce by half the proportion of people living on less than a dollar a day“. There were about 1.2 billion people living on $1 per day or less in 2001 (about 1 in 5 people). The trouble with this goal is that it encourages efforts to focus on the second poorest 600 million people in world, in the hope that they can be dragged over the MDG line because they are nearest to it. [Similar things happen with any target for clearing a threshold: eg. in education, getting 5 good GCSEs… teacher’s incentive is not to waste time on some kid that can’t read]. As the chart shows most of the MDG progress to date is from rapidly growing China and the Far East… in sub-Saharan Africa, it’s actually heading the wrong way. END_OF_DOCUMENT_TOKEN_TO_BE_REPLACED 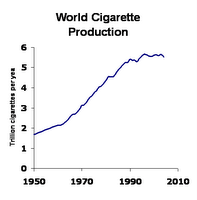 World cigarette production is about 5.53 trillion sticks per year. (about 2.4 per day for every single person in the world). This is stabilising as people in developed countries quit and growing populations in the developing world start puffing. According to WHO’s tobacco group, death-toll from this is now about 5 million per year, heading for 10 million. With perhaps 1 billion potential premature deaths at stake in 21st Century on current trends. In other words it’s huge.

What is absolutely amazing though is that there are forms of tobacco use about 10- 100+ times less hazardous than smoking (ie. chewing, sucking – anything non-combustible) – it’s the smoke that really kills. Widespread use of these is why, for example, Sweden has the lowest rates of cancer and heart disease in the world. If the world tobacco market shifted to selling more of this and less cigarettes, millions of premature deaths could be avoided over the 21st Century. But true to form, the well paid and comfortably smug public health community refuses to accept this concept and adopts a counter-productive prohibitionist stance – hoping naively that if people have a choice between quitting and dying, they’ll choose to quit. END_OF_DOCUMENT_TOKEN_TO_BE_REPLACED

Annoying!!! I want to do something simple… plot a bar chart for a bunch of countries where the width of each bar = the population of the country, the height of the bar = its GDP/capita and hence area of the bar = its GDP. Clearly an insane requirement – who would ever want to display world poverty in such an obvious way? This type of chart is called a ‘mekko’ or ‘marimekko’ chart (example to the left). After years of new versions and irritating paperclips and lots of other rubbish, can MS Excel even do this? Er, no… Ray Ozzie was hired by Microsoft to buff up its sagging innovation record. His excellent memo Internet services disruption took the lame corporation to task for its record on innovation. Despite having a $7 billion R&D programme they’ve been hammered by Google on serach, Blackberry on mobile, iTunes on music, Sony on games… and so on. R&D and innovation… two very diffrent things. 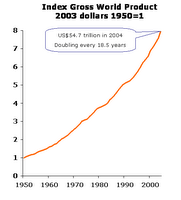 It might not be so easy with the world economy… END_OF_DOCUMENT_TOKEN_TO_BE_REPLACED

The third point has important and urgent relevance in Britain today… 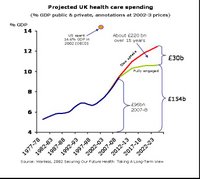 Health Minister Andy Burnham disgraced himself this morning on the radio. Subject is ‘patient choice’ (BBC item), which is to be expanded. In my view, generally a good idea to put the patient and their adviser (usually the GP) in the driving seat – if money follows the patient then suddenly patients matter more to eveyone in the NHS. Whatever anyone says, the NHS is a bastion of producer interest and its staff quite capable of treating you as if you don’t exist. There’s lots that can go wrong of course, but patient choice is right should be doable. Burnham’s disgrace was to fudge the critical question: what happens to places patients choose to abandon? He came up with some weasel words about support from the centre for hospitals that were struggling. But choice will only work if there is a credible exit strategy for places that aren’t chosen. Vast sums of money and growing share of national income are at stake – see chart (click to open larger version). Ministers have to be much more careful than they have been about who gets to spend it and how that is decided. Just back from an excellent break in the Lake District, but had cause to reflect on the reasons for Britain’s poor record on economic productivity compared to the US. I’m convinced it’s little to do with the rise of China taking all our jobs, the failing biotech revolution, poor R&D spend or any of the other reasons usually offered. No, it is something much closer to home: the underperforming British consumer is to blame.

The basic reason is that Brits too easily put up with rubbish service or products or are too undiscerning to notice that’s what they have been offered. The consumer is the problem… END_OF_DOCUMENT_TOKEN_TO_BE_REPLACED