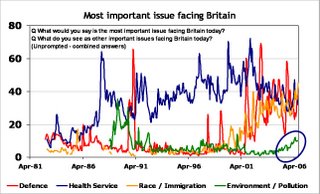 I was asked at work if environmental concerns are now setting the agenda – what with “Vote Blue, Go Green“, green tax proposals, the appointment of a blogger to run Defra, and heavy news coverage in recent months for matters environmental – especially climate change, energy and droughts. IPSOS-Mori has tracked what is bothering Britons for many years [data here], and it seems there has been a discernable upswing in people describing ‘environment’ or ‘pollution’ as an important issue facing Britain (see chart – click to expand). But Mori’s tracker also shows the big three concerns are defence, the NHS and race & immigration. The latter has risen sharply since 2001 and is now the most frequently mentioned issue.