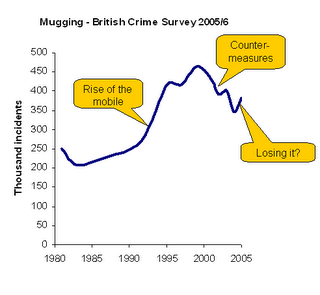 The motive for collusion is clear – when a mobile is stolen, it is replaced with a new phone and a new user (the person taking the stolen phone) has access to the means to make calls. Muggings rose rapidly with the rise of the mobile, but fell only when there was effort to make it more difficult – both by policing initiatives in 2002 and by enabling the barring of stolen phones from 2002.

But it still seems to be going on… A walk down Kingsland High Street confirms phones can still be unblocked or sold for use overseas. And with more mobile devices there is (premature) speculation that mugging is on the rise again after falling since 2000. It just cannot be that difficult to disable stolen mobile phones, world-wide if necessary, but only if there was a a real will to do it by the makers… but there isn’t and it’s only under duress and public exposure that the mobile companies are belatedly doing anything about it (see BBC: Stolen mobiles will be blocked and the press release from Mobile Industry Crime Action Forum. One option would be to require the companies to replace stolen handsets at no charge – they’d soon find a way to stop them being used if blocked.