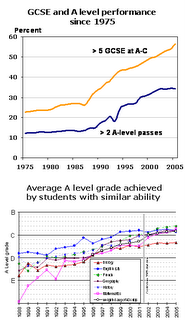 Was something added to the water in 1988? From about then, there has been a steady rise in kids doing well in GCSE and A levels (see chart). Good for them. You would expect improvements in teaching, learning and attainment over time – because there is no reason why teaching and learning should not be subject to productivity gains just like everything else – and there has been an explosion of opportunities to learn over the lest couple of decades. But the A level pass rate has now reached 94.4%, with 22.1% bagging an A grade [official stats]. Much agonising has gone into whether the exams have just got easier, the kids smarter or the teachers better. Probably some of each. Actually there is good evidence to help…

It seems that a candidate of a given ability (as measured in standardised tests over time) would have scored higher A level grades as the years passed – see lower chart to the left. It also seems that some A-levels are easier, in that candidates of standardised ability will do systematically better in some subjects (media, textiles, drama) than others (latin, statistics, chemistry). As well as each subject becoming easier to do well in, there has also been a shift to the subjects that are relatively easier to do well in. This fascinating research by Dr Robert Coe of Durham University is summarised here. He generously suggests several explanations for his results… better teaching, better exam technique, changes in assessment method may allow more students to demonstrate higher capability, changes in the reference group taking the standard test and easier exams and assessments.

But what problems arise from this?

Two really. Firstly , intertemporal comparisons – especially over long periods are difficult if the standards are inconsistent. But apart from the wounded vanity of people who did well in their A levels in 1979, this isn’t really a problem as A-level comparisons between people of considerably different ages are rarely made for practical purposes, like employment.

Secondly, and more problematic is in making distinctions between the top performers in the current cohort. This is a problem as there is a strong demand for qualifications that will identify the top 1%, 5%, 10% etc. But with A-grades reaching 22%, the A level system doesn’t provide this. The A* grades just test the ability to provide perfect answers to easy questions, which isn’t much help. But employers and higher education institutions that want to identify high performers will always find ways to do it – and we are now witnessing this: the growth of the International Baccalaureate, new pre-University exams, and screening out easier A levels as ‘unsuitable’ or ‘ineffective’. Guess which schools will adapt most effectively to this ad hoc approach to screening for elite performance…?

All of this is, however, secondary to the real problem with A-levels and GCSE. Which is that they just aren’t fit for purpose any more. Too much specialisation too early combined with a narrow view of education and skills. The Tomlinson Report commissioned by the government and published in October 2004 had a brilliant critique of qualifications system for 14-19 year olds:

It is our view that the status quo is not an option. Nor do we believe further piecemeal changes are desirable. Too many young people leave education lacking basic and personal skills; our vocational provision is too fragmented; the burden of external assessment on learners, teachers and lecturers is too great; and our system is not providing the stretch and challenge needed, particularly for high attainers. The results are a low staying-on rate post-16; employers having to spend large sums of money to teach the ‘basics’; HE struggling to differentiate between top performers; and young people’s motivation and engagement with education reducing as they move through the system

Tomlinson’s review recommended a diploma system similar in concept to the ever more popular International Baccalaureate – which, like the IB, would stretch the top performers, but also not exclude or degrade vocational study. Tomlinson’s extraordinary achievement was to secure buy in to this idea across political parties and a wide range of stakeholders including OFSTED, the schools inspector. However, when the government responded in the form of its 14-19 Education and Skills White Paper it ditched the main proposals made by Tomlinson’s team and insisted that A-levels are here to stay as the ‘gold standard’ – an approach that is already falling apart.

Why did the government perform this apparently self-immolating act…? I can only draw your attention to the BBC Education Correspondent’s dismal account of shallow politics and political ineptitude – about which I couldn’t possibly comment.