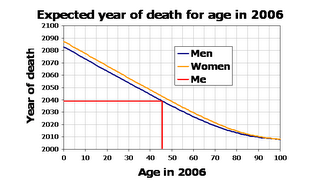 The recent hot weather remined me how annoying much of the 21st Century is likely to be, what with climate change and everything. So I wondered how much of it I might have to endure. You can look up how long you are expected to live at the Government Actuary Department’s life tables. I’ve got 33.5 years to go from my last birthday – meaning I’m anticipating a statistical death on 21st August 2039. A party is planned. (Data for England)